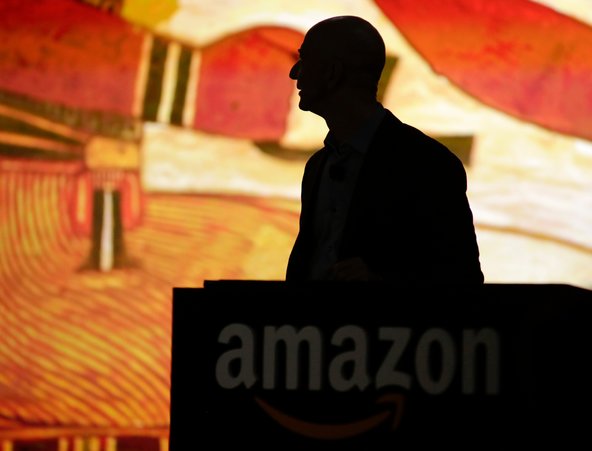 Jeff Bezos, the chief of Amazon, whose Amazon Web Services hosts the biggest corporate names in its public cloud.

How worried should Amazon be about its biggest hope for the future? The giant online retailer has long said that its business selling computing services over the Internet, called Amazon Web Services, would eventually be the size of its mainstay business of selling stuff. In Thursday’s earnings report, however, growth of the business looks to have dramatically slowed in ways that hadn’t been seen before.

A.W.S. is still tiny, compared with Amazon’s efforts in books, devices and reselling for others. Amazon does not break out figures for the web services, but company executives confirm that the division is by far the biggest part of the “other” category of its reported revenue.

For the second fiscal quarter, that segment was $1.2 billion, a rise of 37 percent from a year earlier. While impressive, that is far less than the growth rates of 50 percent or more recorded for multiple quarters.

Compared with the first quarter, the sector actually shrank 3.2 percent. There hadn’t been a consecutive drop since the Amazon’s first quarter of 2013, and that was because of  the heavy use the web service gets during the holiday season. This time, the money just didn’t come in.

What happened? Certainly, the law of large numbers says nothing can grow at nosebleed rates forever. This seems early in the game for a slowdown, however, since Amazon Web Services and its competitors think public cloud computing will eventually dominate the global computing business.

On an earnings call, executives said A.W.S. had to respond to price pressure. Specifically, in late March, Google announced dramatic price cuts for its cloud business, which Amazon had to match. Microsoft, which offers a cloud business called Azure to the public, has a policy of matching Amazon, and followed suit.

A.W.S., which still hosts the biggest corporate names in its public cloud, put a brave face on things. “AWS continues to grow strongly,” the company said in its earnings release, “with usage growth close to 90 percent year over year in the second quarter.” Amazon also said that A.W.S. staff “grew by thousands of employees this past year.”

That may point to a deeper problem for A.W.S. than one-time price cuts. As public cloud computing moves from a service for developers and experimentation, and into a mainstream corporate business, getting business is going to cost more and take longer.

“Enterprise adoption is pretty tough for the public cloud — not because of security, but because of all the agreements that have to be made throughout an organization,” said Chris Gaun, global cloud strategist at Apprenda, a company that works with public clouds, including Amazon, to help companies move their computing there. “A real sales cycle is 12 months,” he said, compared with a few minutes when a single individual is signing up for A.W.S.

Price, people and time are costs that don’t play well for A.W.S., given the big competitors now seriously in the business. In its most recent quarters, Amazon had $5 billion in cash and marketable securities. Google had $59 billion, and Microsoft had $88 billion. IBM, which is also building a public cloud business, had $10 billion and a substantial amount of debt to service.

What Amazon’s service does have is a great roster of named clients, and probably lots more companies that aren’t ready to admit somebody else runs their computers. It has an enormous cloud and a technical understanding of global-scale computing that is second to none. All it needs is a bigger sales team for businesses and a way to get its checks signed faster.